Climate Change -- Past, Present, and Future 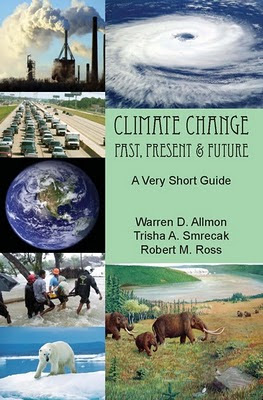 In light of the publishing of their new book, the authors of Climate Change -- Past, Present & Future: A Very Short Guide gave a lecture this past Saturday, April 25th, outlining the key points they hoped to make by publishing this work.

According to Dr. Warren Allmon, one of the three authors of this publication, the book was written for two reasons: First, so that the museum had a physical product to give to people interested in or curious about climate change, and secondly, because they believe that climate change “is the most important topic of the 21st century. It is something we really should be thinking about.”

Dr. Robert M. Ross, another of the authors of Climate Change -- Past, Present & Future: A Very Short Guide presented the team’s research on how to accurately analyze climate science by looking at the climate change of the past, as well as why it is important to study the phenomenon of global warming. “Global temperature is a very abstract concept to most people,” says Ross. It is difficult to grasp the concept of an average temperature over the entirety of the earth’s surface, he says. Scientists will oftentimes average the earth’s climate from multiple years and compare this data to that of years past. The purpose in doing this is to analyze trends in global climate in order to determine any abnormalities in the earth’s current conditions. It is important to know this information, says Ross, because climate change affects all life on earth.

A second key point of the publication, as presented by author Trisha A. Smrecak, is the effective teaching of climate change to youth and adults alike. According to Smrecak, there are a number of necessary steps that must be taken in classrooms in order to truly educate the American public about the importance of climate science.

First, it is important to engage students’ existing conceptions about climate and climate change. Everyone has preconceived notions, she says, that are based in science. It is important to address what people already know and move from there.

Secondly, it is important to teach science in science classrooms, not politics. “We can go so much further by understanding the science itself and letting people make their own inferences,” says Smrecak.

Also, it would be beneficial to teach climate change across the curriculum in schools to promote a higher understanding of the topic. Climate change can be incorporated into all areas of the science curriculum since it is steeped in scientific history and affects all facets of life on earth.

The book also suggests that being emotional or pessimistic about the topic of climate change works as a detriment to the cause of proper education on the topic. “People get sick and tired of hearing that everything is going to fall apart,” says Smrecak. “It is important to think about small, measurable goals that we can achieve.” It is more important when trying to motivate people to take action to focus on the small steps they can take than it is to focus on the big picture. People feel overwhelmed trying to fix everything at once.

Going off of this point, the book explains that it is important to highlight opportunities for youth to make a difference. Showing youth volunteer opportunities as well as future career opportunities empowers them to see that they can have an impact on the future of climate change.

Finally, says Smrecak, it is easier to teach students and community members about climate change if local, tangible examples are used. Since global climate change is such an abstract concept, it can be difficult for people to grasp. They may not always understand the severity of climate change if they have not directly experienced it. Instead, people respond better if they can see an example that affects their daily lives. Encouraging a community to take action is much easier if people can directly see the motivating factor behind their actions.

Allmon also addressed the audience on the issue of society not truly accepting the significance of climate change.

One key reason society in general tends to ignore the importance of climate change, says Allmon, is that we like to avoid bad news, and because of this we are often susceptible to listen solely to things we want to hear. “We actively turn off what we don’t want to think about,” says Allmon. “If we only listen to one point of view and that point of view happens to be uninformed, then it becomes a self-perpetuating cycle.”

Also an issue, says Allmon, is that as a society, we don’t like to accept science that is not backed by absolute data, not understanding that science is an ever-evolving process that rarely boasts a great deal of certainty. “One of the primary reasons for people not accepting that climate change is occurring,” says Allmon, “is that they don’t fundamentally understand how science works.” According to the book, people are reluctant to accept climate change because the science is not “certain.” Since the scientific data relating to climate change may be flawed to a certain extent, people are less willing to make dramatic changes to their everyday lives.

Despite the depressing nature of the topic, Allmon states that the possibility for change does indeed exist. “There is no possibility of stopping global warming,” he says, “but reversing it is a possibility eventually. The only way out of this is education, and right now education is pretty slow.”

Climate Change -- Past, Present & Future: A Very Short Guide can be purchased for $15 at the Museum of the Earth’s gift shop or online by clicking here: Climate Change.

Posted by Paleontological Research Institution at 7:46 AM

What is meant by "teaching climate change in schools?" Aren't students normally taught about climate cycles as part of Earth science classes, when they learn about the history of the Earth?

Paleontological Research Institution
PRI and its Museum of the Earth is located in Ithaca, NY, and was founded in 1932 by Gilbert Harris, professor of geology at Cornell University, to house his collection and library, the Institution has gone through several expansions, most recently with the creation of the Museum of the Earth. The Museum contains 8000 square feet of permanent exhibits, telling the history of life on Earth through the geological record of the Northeastern U.S. Unique elements include the skeletons of the Hyde Park Mastodon and Right Whale #2030 and the 544 square foot mural, Rock of Ages Sands of Time.